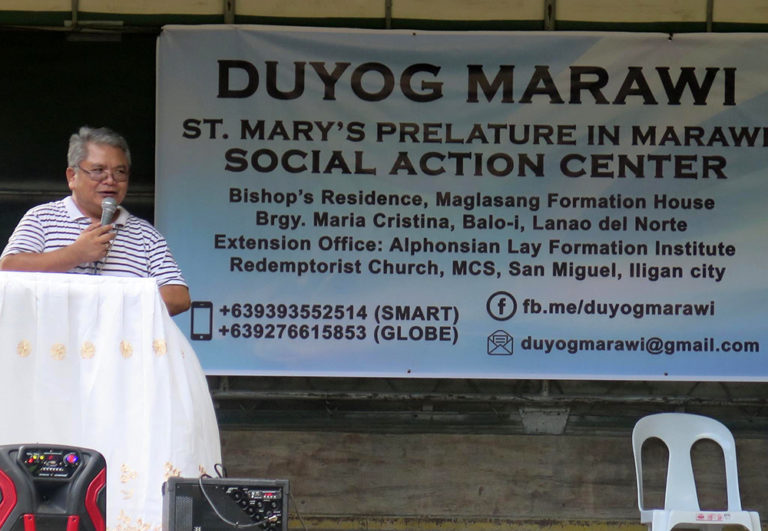 MANILA– A Catholic bishop lauded the recovery of Fr. Teresito “Chito” Suganob, who had been held by the Islamic State-inspired Maute group since the crisis erupted in Marawi City nearly four months ago.

Bishop Edwin dela Peña of Marawi commended the military for its efforts in rescuing Suganob and other hostages abducted by the terrorists.

“I am happy receiving messages about Fr. Chito’s rescue no matter how hazy they are,” Dela Pena said in a phone call from Abu Dhabi International Airport.

The bishop is on his way to Manila after speaking before a congregation in Rome on Friday about the situation in Marawi and the continuing interreligious dialogue in his prelature.

He said no official report of Fr. Suganob’s rescue has reached him though he expressed delight learning of his priest’s condition.

Due to arrive Manila at about midnight tonight, he said his first agenda is to fly back to Mindanao and meet his priest.

It will be recalled that Suganob was filmed appealing to the government to stop the military operations against the Maute which launched an assault on government and civilian facilities in Marawi City last May 23,2017.

He, however, declined to give more information because of ongoing military operations in the area with the hope of rescuing more civilian hostages.

Defense Secretary Delfin Lorenzana was earlier quoted saying the military operations in Marawi City would soon be over. CBCPNews