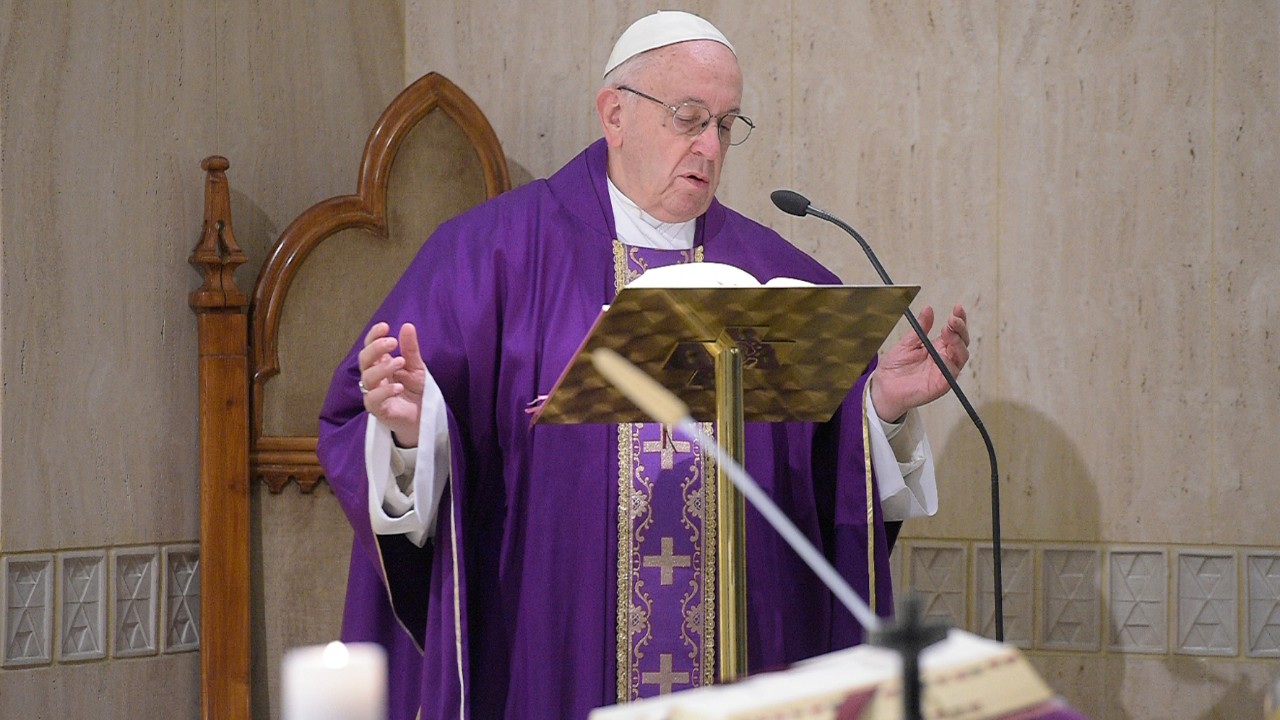 Pope Francis has reminded the faithful to give up something for Lent only if it demonstrates compassion and enriches others.

Pope Francis’  words of warning against what he called “fake fasting” came during the homily on Friday at morning Mass in the Casa Santa Marta.

When fasting, Pope Francis said, a true Christian must be consistent, not putting himself on show, never despising others or engaging in quarrels or disagreements.

Warning against behavior that is inconsistent with the Lenten spirit, the Pope invited those present to ask themselves how they interact with others.

He reflected on the First Reading of the day that highlights how the fasting that is acceptable to the Lord aims to “release those bound unjustly, untying the thongs of the yoke; setting free the oppressed, breaking every yoke”.

Don’t pretend to be virtuous

Pope Francis reminded believers that fasting is one of the tasks of Lent, and said that even “if you cannot commit to a total fast, the kind that makes you feels hunger in your bones” you can still fast humbly and consistently.

Isaiah, he said, highlights so many inconsistencies in the practice of virtue, like “carrying out your own pursuits, driving all your laborers, and yes, your fast ends in quarreling and fighting”,

Fasting, the Pope said, is a little like “stripping oneself” of pride. He said that to thank the Lord and at the same time despise your labourers that are forced to fast because they do not have enough to eat is inconsistent and unchristian.

Inviting those present to perform penance in peace, he said “you cannot talk to God on the one hand and to the devil on the other”.

He also warned against the temptation of ‘showing off’ by fasting: “by making a fuss of it and letting people know that we are practicing Catholics and we do penance, so that people think ‘what a good person’. This is a trick” he said: “It’s pretending to be virtuous”.

Fasting with a smile

“We must pretend, Francis continued, but with a smile. That is not showing others that we are performing acts of penance.”

He invited the faithful to fast in order “to help others. But always with a smile”.

Fasting, he said, also involves lowering oneself by reflecting on one’s sins and asking forgiveness from the Lord.

How ashamed would I be, he continued, if my sin was to become common knowledge through the press? And referring again to the Scripture Reading of the day he invited Christians to “release unjust bounds.”

Pope Francis went on to tell another story stemming from personal experience. He said that once, when speaking to a very cultured gentleman who was known to exploit his domestic workers, he explained to him that this is a serious sin because we are all created in the image of God.

And referring again to the First Reading that tells us “to share our bread with the hungry, shelter the oppressed and the homeless, clothe the naked when we see them, not turn our back on our own”, the Pope noted that currently there is much discussion around whether or not to give shelter to those who ask for it.

He exhorted Christians to “do penance”, to “feel a little hunger”, to “pray more during Lent” and to ask themselves how they behave towards the other:

“Does my fast help others? If it does not it’s fake, it’s inconsistent and it takes you on the path to a double life, pretending to be a just Christian – like the Pharisees or the Sadducees” he said.

Let us ask for the grace of consistency he concluded:” if I am unable to do something, I will not do it. I will do only what I can with the consistency of a true Christian.