The Church and martial law 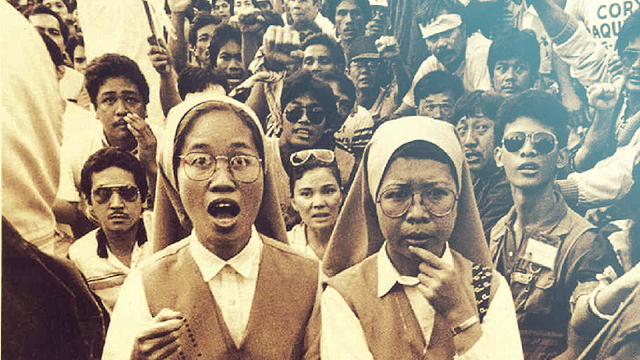 Photo taken from the public domain of the internet.

THE Catholic Church in the Philippines is no stranger to Martial Law. From 1972 till 1986 she, like the rest of the nation, went through what most thinking Pinoys consider among the dark years of their history, mainly because of the death of democracy under one-man rule. The clampdown on the opposition considered enemies of the state that included politicians, students, farmers, ordinary citizens purportedly to save the Republic from ruin resulted in countless disappearances, detentions, tortures, summary executions and other human rights abuses of prominent and nameless citizens.

No wonder, many members of the clergy and lay faithful, particularly the generations that saw by close up and experienced Martial rule on a daily basis, took the president’s declaration with plenty of wariness and trepidation. After all, the current president has, in a number of times, unabashedly declared his admiration for the first Filipino president to declare Martial Law over the whole country, even characterizing those years as “very good”.

Yes, it is not as if Martial Law came to us as a surprise. The president, on previous occasions, has been thinking out loud through the media, seemingly testing the waters, of bringing his anti-drug, anti-crime, anti-corruption agenda to its inevitable date with what he considers a tool to save the country from “destruction”: Martial rule. We in the Church cannot say we were not forewarned. I believe our experiences with the first Martial rule had a few lessons we can and should never do without. Or we could repeat the horrors of yesteryears.
For instance, His Eminence Jaime Cardinal Sin’s “critical collaboration” stance still rings and brings some relevance today. Some bishops have already supported publicly the declaration of Martial Law in Minadanao in lieu of a more collective statement from the CBCP.

It is clear that the grave situation of peril and crisis in Marawi and a desire to prevent their spillover into other parts of Mindanao or the Visayas or Luzon are foremost in their minds. Or perhaps the existence of the 1987 Philippine Constitution safeguards (continuing operation of the three branches of government, the power of review by Congress or the Supreme Court) have softened for them the notion of martial rule under the present circumstances. But a dose of caution is always a fruit of acting by Cardinal Sin’s stance. We could collaborate when the State uses Martial Law to achieve its legitimate ends, such as the security and safety of citizens, respect for and protection of human rights despite the existence of crisis, and the return to normalcy (democratic not autocratic life, that is). But the Church must also turn “critical” when Martial Law becomes again an instrument of repression and abuse of power as well as a convenient cover-up for inefficiency in government (like failure of intelligence) or a lack of effective programs to resolve poverty and social injustice, the twin roots of rebellion and social unrest.

The hierarchy has always been encouraging the lay faithful to actualize in the fields of politics, economics, culture, and sciences the values of the Gospel. Unfortunately in the Philippines political interests and the basic drive to survive in power exert more influence in the decisions and actions of its leaders than the Gospel. We see it in politicians’ reactions to the declaration. Again the Church in the Philippines is deeply, and sadly, aware of this reality. Yet, rather than give in to the pressure of leaving things well enough alone, the Church should not stop bringing its politician sons and daughters to account and to the summons of the Good News of justice and peace, by way of silent lobby, if need be, or by way of proclaiming the Word to their constituents, the voters.

Above all, the Church especially after Vatican II and PCP II have a lot of things to live by, such as being “a sign and instrument of Communion”, “Community of Disciples” or “Church of the Poor” constantly being threatened by our destructive partisan and personality-oriented politics, not to say by the scandalous gulf between our rich and our poor, by the onset of terrorism and EJKs as well as by the seemingly insatiable corruption and criminality in our systems and structures of government and society. In a word, the Church’s very nature compels her to be involved in urging both the Martial Law apparatus supporters and its critics to “turn away from sin” in their decisions, structures and programs as well as to “follow the ways of the Gospel”.

After all, it is the radical demands of that same Gospel that really point to real peace and harmony among the majority Christians and yes even with rebels and terrorists. Or do we need to be reminded by St John Paul II that Jesus, in becoming human, has become one with every human being, regardless of race, gender or religion (Redemptor Hominis, no. 13)? Or should we continue to have the message of the Lady of Fatima that we “pray and do penance” for fellow sinners fall on deaf ears, firstly our own?