The Prophetic Mission of the Church under Martial Rule 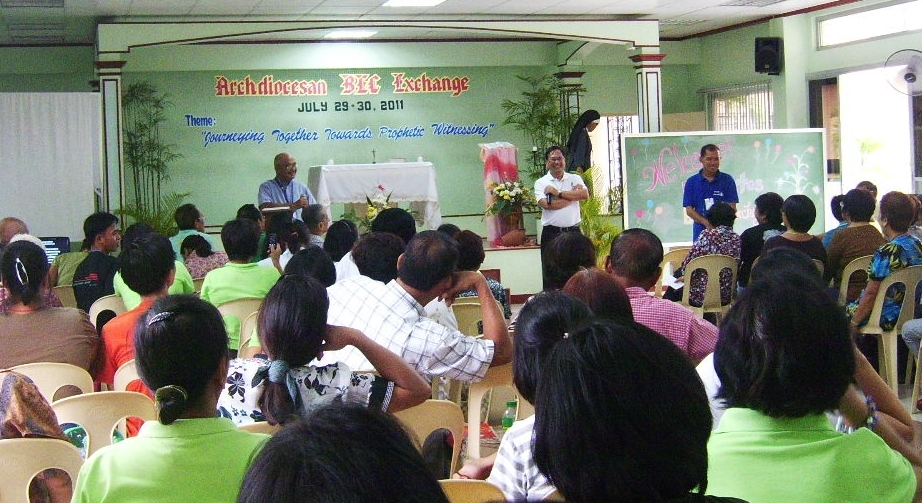 The Prophetic Mission of the Church

FORTY years ago, President Marcos declared Martial Law and inaugurated a dictatorial regime that lasted for fourteen years. At that time, the Catholic Church in the Philippines was in the process of implementing the reforms initiated by Vatican II seven years earlier. The first Mindanao-Sulu Pastoral Conference held in 1971 had just started promoting the formation of Basic Ecclesial Communities (known as Gagmayng Kristohanong Katilingban) in Mindanao. Social Actions Centers were being established in most of the dioceses after the 1968 Rural Congress. Many dioceses had their own radio stations.

The largest peasant movement (the Federation of Free Farmers) was thriving under the leadership of Catholic lay people and with the support of priests and religious. Political groups and movements with Catholic/Christian inspiration had sprouted: Christian Social Movement, Khi-Rho, Kasapi, Lakasdiwa, KDSP, etc. Community Organizing Programs were initiated in urban and rural poor areas with the support of priests and religious. Thus, at the time Martial Law was declared, the Catholic Church was just awakening to her social role in Philippine society and addressing the social issues such as poverty, inequality, injustice and corruption.

While other institutions in society, such as the political parties, the press, and other civil society groups were dismantled or silenced, the Catholic Church remained steadfast. The closure of diocesan radio stations and the arrest and imprisonment of some priests, religious and seminarians did not stop the Church from carrying out her social mission.  In urban and rural areas, members of BECs continued to gather in their chapels and homes to reflect on the Word of God and on their concrete situation. This broke the culture of silence and created spaces of resistance. Many joined rallies and demonstrations to protest human rights violations and demand for an end to the dictatorial rule. Tagged by the military as threats to national security, many BECs endured military harassment and some of their organizers and leaders were imprisoned or killed. Many priests continued to preach against the abuses of the dictatorial regime and some of them had to pay with their lives—such as Fr. Godofredo Alingal, SJ and Fr. Rudy Romano, CSsR. There were groups of bishops who came out with statements critical of Martial Law. The Association of Major Religious Superiors of the Philippines (AMRSP) constantly came out with statements denouncing abuses of the dictatorial regime. The AMRSP formed the Task Force Detainees (TFD) to follow up the cases of political detainees and work for their release. At a time when the freedom of the press was suppressed, the AMRSP operated the Ichthus which provided news and information during the early years of martial law.

Marcos failed to ride on the 1981 visit of John Paul II to legitimize his dictatorial rule. The pope exercised his role as conscience to a society where oppression, injustice and inequality prevailed. When Marcos called for a snap election, the Church supported the NAMFREL and when it was clear that Marcos cheated, the CBCP denounced this and declared that his rule was without moral basis. The call of Cardinal Sin to support people power and the presence of priests, religious and lay people with their religious symbols at EDSA assured a peaceful transition to democracy.

In all of this, the Church exercised her prophetic mission. The Church through the clergy, religious and lay people played a significant and central role in the struggle against the dictatorial role. This is a contribution that cannot be forgotten or ignored.

Just because the dictatorial regime is long gone, it does not mean that the Church has stopped exercising her prophetic role. The Church continues to announce the message of life, justice, peace and the integrity of creation. The Church continues her role as conscience of society as she denounces the various manifestation of the culture of death: poverty, inequality, the destruction of the environment (through mining and logging), the lack of respect for the right to life (especially of the unborn), the ongoing armed conflict, extra-judicial killings. Those who accuse the Church of being a conservative and reactionary institution are misinformed or ignorant of the Church’s prophetic mission. The Church cannot be marginalized or eased out from the public sphere. She cannot be silenced nor will she remain silent.

In season or out of season, under whatever form of government or administration the Church will always carry out her prophetic mission.