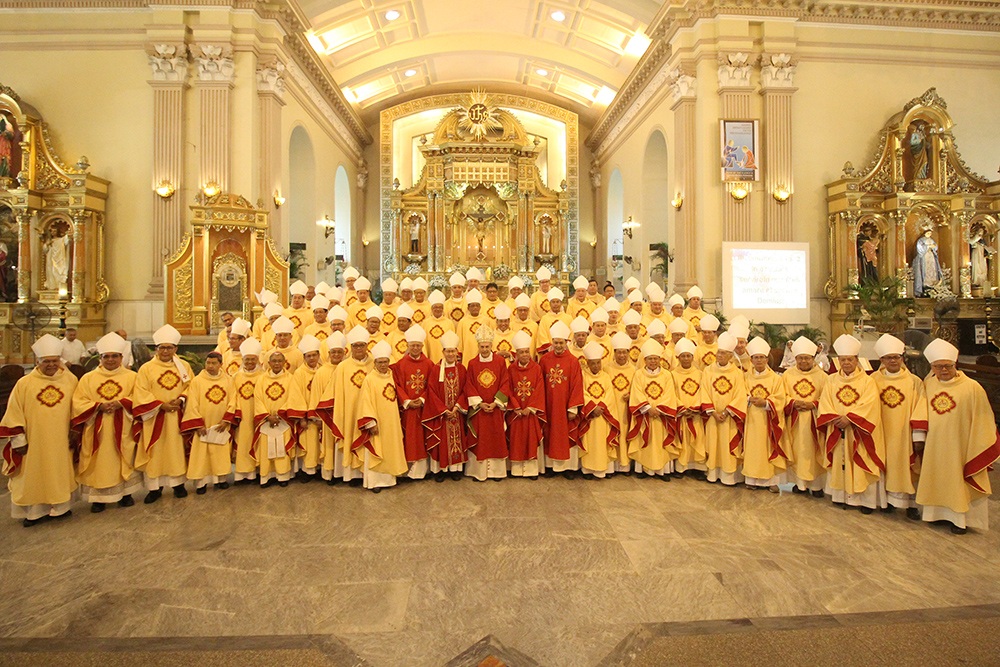 Catholic bishops pose for a group photo after the opening Mass of their 116th plenary assembly at the Cebu Metropolitan Cathedral on Jan. 27, 2018. SAMMY NAVAJA

To change or not to change the Constitution, that is the fermenting political question of the day. The move for Charter change is, and has been, the proposed vehicle to adopt Federalism as a new form of government. But ignored in the welter of political opinions regarding Charter change is the fundamental moral dimension of this human political act.

On the matter of changing the 1987 Constitution, the Catholic Bishops’ Conference of the Philippines has declared its moral stand not only once but at least five times since 1987.

We began with a moral judgment in 1986 declaring that, though imperfect, the provisions of the draft 1987 Constitution were consistent with the Gospel.

In subsequent attempts at Charter change by our legislators,[2] our moral stand was and remains consistent, namely:

Amending the fundamental law of the land, so carefully crafted for the common good after years of dictatorship, requires widespread peoples’ participation and consultation, unity of vision, transparency, and relative serenity that allows for rational discussion and debate.

A Moral Critique of the Charter Change Movement

From the moral teachings of the Church, four principles stand out as bases for moral judgment on this current move towards Charter change.

1. The Principle of Human Dignity[3] and Human Rights[4]

Human rights flow from the God-given dignity of the human person. Men and Women are all created in the image of God. The human person is sacred, bearing the imprint of the Divine. In the 1987 Constitution are enshrined fundamental human rights that correspond to Christian values based on the Gospel.

Given present developments and trends in legislation where pro-life principles are even now being undermined, we are deeply concerned that such principles, which are consistent with the fundamental nature of marriage and the family, and which are now enshrined in the 1987 Constitution are most  likely to be overturned.

2. The Principle of Integrity and Truth[5]

This moral principle requires total transparency and accountability, clarity and purity of motives. When the move for Charter change becomes self-serving, such as when it calls for “No-El” (no elections) and pushes for an extension of terms of office, it is to be expected that citizens would react with suspicion, astonishment and exasperation.

In addition the feeling of a creeping dictatorship is conjured by past experience. Moreover, political dynasties are really and factually becoming a dominant factor in our country’s political life.

3. The Principle of Participation[6]  and Solidarity[7]

Participation is at the heart of democracy. Clearly, a move for Charter change that involves transforming the Congress into a Constituent Assembly is bound to be deficient of widespread peoples’ participation, discussion, and consultation. It would be totally rash for members of Congress to presume the reasoned approval of their constituents on so grave an issue as the move to overhaul the nation’s Charter.

When such a situation arises, the principle of solidarity is patently violated. Solidarity is the “persevering determination to commit oneself to the common good” for we are responsible for one another.[8] This principle summons us to protect one another’s rights and to work together for the good of the family, the community, and of the nation.

Moreover, a full understanding of the common good goes beyond mere political, social, or economic good. Our moral teaching describes the common good as “the sum total of social conditions which allow a people, either as groups or individuals, to reach their fulfillment more fully and more easily”.[10] Thus the common good would include defense and promotion by the State of fundamental moral values regarding human dignity, human rights, and religious freedom – necessary paths to full human life. A rash move for a new Constitution places these moral values in extreme peril.

Of significance is the fact that PCP-II listed the following as the first two requirements for lay participation in political leadership:[11]

“that the basic standard for participation be the pursuit of the common good;

that participation be characterized by a defense and promotion of justice.”

Convergence of the Moral and Political Critique

If the Constitution is to be revised at all, the process should lead to a greater defense and promotion of the above-mentioned moral values of human dignity and human rights, integrity and truth, participation and solidarity, and the common good.

These are the moral translations of the political critique on Charter change, to wit, the broadening and deepening of the differentiated institutions of democracy, the enhancing of the separation and distinction of various forms of state powers, the fostering of social justice, the resolution of issues of massive poverty, corruption, patronage politics, political dynasties, centralization of power in the  so-called “imperial Manila,” and the blatant disregard for human rights (e.g., in the campaign against illegal drugs).

It is hopefully with these aspirations in mind that the members of the consultative committee recently appointed by the President to review the 1987 Constitution carry out the task expected of them.

As servant leaders, we have listened to many others who believe that the solution to these problems is not a revision of the Constitution, but a full implementation of the 1987 Constitution (e.g., on political dynasties & on freedom of information), and a revision of the Local Government Code, originally designed to devolve power from central authority, following the moral principle of subsidiarity.

We have also heard the views of those who believe that the solution we seek is ultimately the transformation of our political culture, the eradication of a political mindset of personalities, pay-offs, and patronage – a culture that is entrenched in our present political structures and practices. Without conversion of mindsets, the new political wine of Charter change will remain in old political wine-skins, and merely end up bursting the hope for a new political culture.

The reported objective of Charter change is to shift from a unitary to a parliamentary form of government in various shapes that would govern federal states. It is often claimed that there is a necessity of devolving powers from the central government to Federal States.

We ask the question: is it necessary to change the Charter in order to devolve power? Many constitutional and legal experts do not seem to think so. What is truly needed for a genuine devolution of power according to them, is a full implementation of the Constitution, the creation of enabling laws, and some revisions on the Local Government Code, and a more decisive effecting of the Indigenous Peoples’ Rights Act.    Only these, they believe, can ensure that self-determination and decentralization of powers, both political and financial, are in fact realized.

Moreover a major objection to a federal system that devolves power to the Federal States on an equal basis will not satisfactorily address the aspirations of the Muslims and Lumads in Mindanao for self-determination and respect for ancestral rights.

Gift of the Spirit – Freedom to do Good and not Evil

St. Paul speaks of freedom that is a gift of the Holy Spirit. It is a freedom towards life and not towards death, a freedom not to do evil but to do good. Political authority is God-given and is designed to defend, promote, and ensure what is good.

When political power is exercised for this task, it fulfills what God intends with this gift.  There the Spirit of God operates and there the freedom of God’s children flourishes.  When political authority fails to do what is good, there the spirit of God is absent.  We should not then be surprised when properly formed consciences declare in the manner of Peter and the other apostles, “We must obey God rather than men.” (Acts 5:9)

Conclusion:   Discern, Decide, and Act with Mary our Mother

We call upon you, dear People of God, to form or reactivate circles of discernment and use your freedom as God’s children to discern, participate, discuss, and debate. Have an informed conscience and decide in the light of Gospel values. Do what is necessary. Persuade our legislators to do only what is genuinely for the good of all on this issue of Charter change.

We entrust this urgent moral task that seriously impacts the future of our nation to the intercession of our Blessed Mother, the Virgin Mary, Reyna ng Pilipinas.

For the Catholic Bishops’ Conference of the Philippines,