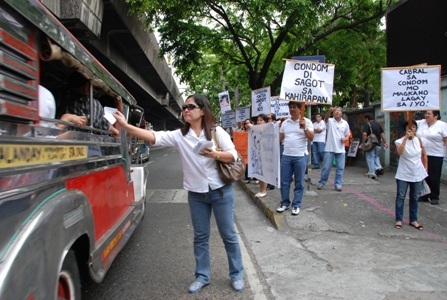 Catholics distribute flyers on the ill effects of the then RH bill in 2014. One of the bill’s provisions is to fund the distribution of contraceptives and population control devices to the public.

MANILA – To give voice to public sentiment in relation to the Food and Drug Administration’s (FDA) approval of 51 contraceptive products and the decision of the Department of Health (DOH) to start the full distribution of these drugs and devices, a coalition of families, health care workers, educators, and pro-life groups launched an on-line petition to demand the FDA and the DOH to reverse their decisions.

In a communiqué disseminated on Nov. 20, the pro-life coalition charged that the “FDA made its decision disregarding the Supreme Court’s ruling on the need for due process before the Temporary Restraining Order (TRO) on the contraceptives can be lifted”.

“There were no rules of procedure, no opportunity given to the oppositor -the Alliance for the Family Foundation Philippines, Inc. (ALFI)- to confront the evidence, and no publication of resolutions giving evidence for its decision vs. the mass of scientific evidence presented by ALFI,” the pro-life coalition revealed.

It can be recalled that the Supreme Court halted the full implementation of the RH Law pending the re-certification of some 51 contraceptives as “non-abortifacient,” in recognition of the Philippine Constitution’s provision protecting the life of the unborn.

“Aside from the legal means, the online petition is one of the means that was decided on to move the FDA and DOH to reverse their decisions,” she explained.

Dayrit highlighted the advantages the online petition offers to the general public. “In the spirit of transparency and good governance, the online petition allows the citizens to participate in a matter of great public interest such as the distribution of contraceptives.”

According to her, deciding on something without the necessary due process and public scrutiny is “a great evil” that Filipino citizens must not allow.

“The online petition will also help other decision-makers to know that there is a sector in the Philippines that care(s) deeply about human lives; it can compel government officials to fulfill their duties based on the Constitution,” she added.

Dayrit acknowledged that the on-line petition initiative is already making a dent. “The FDA has reacted and sent feelers!”

She also praised the fast pace at which the petition reached 3,200+ signatures. “These are real persons, not ‘trolls’,” she stressed.

“But clearly, the battle is only beginning. We need to [raise] up the numbers even more if we want victory.”