Pope at Mass: Faith is not a show but thinking like Christ 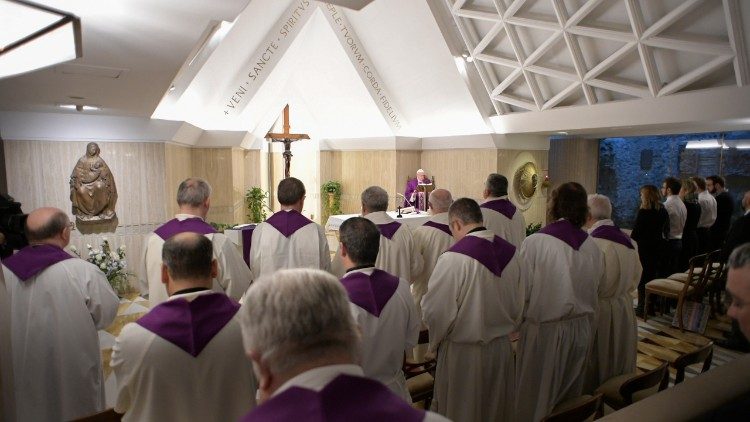 Pope celebrating Holy Mass in the chapel of Santa Marta in the Vatican, 5 March, 2018. (Vatican Media)

In his morning Mass at the Casa Santa Marta, 5 March, Pope Francis said that the Church urges us to to covert our way of thinking in line with Christ’s teaching.

(Vatican News) According to Pope Francis, faith and religion are not a “show”, but a way of converting our thoughts to the ways of Christ.  Delivering a homily at his morning Mass on Monday at the Vatican’s Casa Santa Marta chapel, Pope Francis said that through the readings of the day, the Church wants us to reflect on the conversion of our thoughts, way of thinking, as well as our actions and feeling in conformity with Christ.

The first reading narrates the healing of the leprosy of Naaman the Syrian by the Prophet Elisha and Luke’s Gospel shows Jesus not accepted by his own people who want to kill him.

Converting our way of thinking

Pope Francis said that the Church urges us to convert our actions through fasting, almsgiving and penance.   Our actions, he said must be like Christ, in the spirit of the Beatitudes.

The Pope said the Church especially speaks to us about converting our sentiments and feelings – converting ourselves to compassion like the Good Samaritan.  It’s not just what we think, but also how we think , the style of thinking. Whether we think a Christian or like a pagan.

No show with God

The Pope also urged Christians not to expect a show from God like Naaman expected from Elisha.  On being asked to bathe himself  7 times in the River Jordan, he gets angry saying the rivers of Damascus are better, and he wants to return home.  Pope Francis said Naaman was expecting a show, but God’s  style is something else.  “He heals in another way”.

Commenting on the Gospel, the Pope noted that the people were initially amazed with Jesus, the son of Joseph the carpenter. But gossip soon changed their attitude. After their admiration and amazement they turned out to kill Him. They too wanted a spectacle, a show.  The Pope said we resist any one among us correcting us. We expect someone with “show” to do it.

The grace of conversion

Pope Francis said one can recite the entire Creed or the dogmas of the Church but unless one does it with a “Christian spirit”, it means nothing. The Pope thus asked Christians to pray for the grace of discernment and conversion of thought.