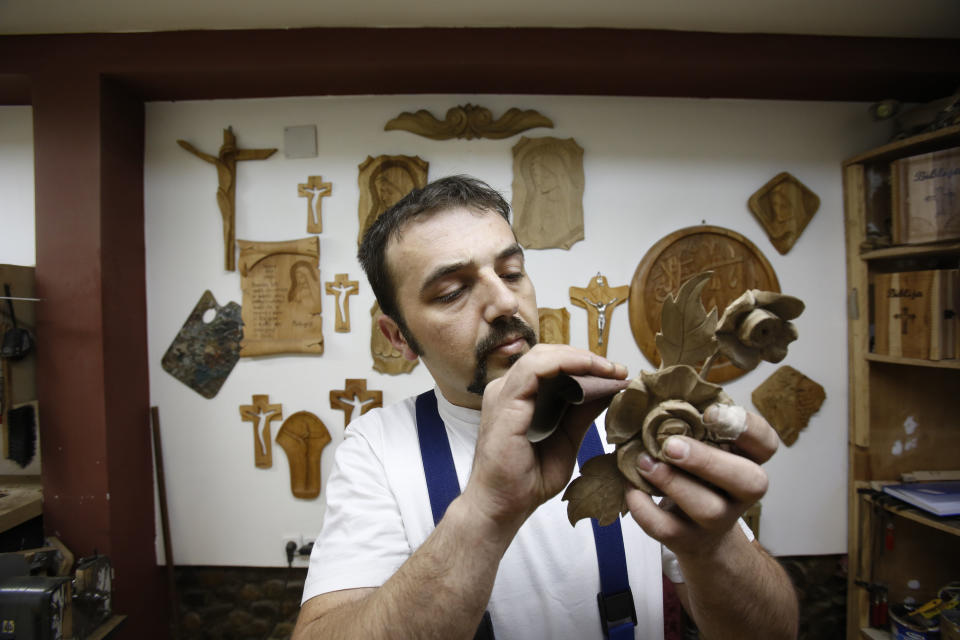 In this photo taken on Saturday, March, 28,2015 Bosnian Muslim craftsman Edin Hajdarovac engraves decoration onto part a wooden chair in his workshop in Bosnian town of Zavidovici, 170 kms north of Sarajevo. Salem Hajdarovac didn’t sleep for a whole week when he heard his workshop had been granted the honor of carving a special chair that Pope Francis will sit on during his visit to Bosnia. Hajdarovac and his son Edin, both devote Muslims, started working on the chair on Monday March 30, 2015 in their little workshop in the central Bosnian town of Zavidovici.(AP Photo/Amel Emric)

ZAVIDOVICI, Bosnia-Herzegovina (AP) — Salem Hajdarovac says he didn’t sleep for a week when he heard his workshop had been granted the honor of carving a special chair that Pope Francis will sit on during his visit to Bosnia.

Hajdarovac, 61, and his 33-year-old son Edin, both devout Muslims, started working on the chair on Monday in their little workshop in the central Bosnian town of Zavidovici.

They have put all other orders on hold to produce the perfect chair by June 6, when the pontiff will hold a Mass in Sarajevo aimed at boosting efforts toward brotherhood in the country ravaged by war two decades ago.

For decades, the family-run workshop has been carving religious souvenirs for visitors of the Catholic Medjugorje shrine and decorations for churches and mosques, but they see the chair as the highlight of their careers.

“It makes me extremely happy, because to make the chair for such a person is a huge and important thing,” Edin Hajdarovac told The Associated Press.

The design of the chair is a secret, they said. All they wanted to reveal is that they will use wood from a walnut tree and that it will depict various religious symbols, such as the Pope’s coat of arms and emblems of three Bosnian cathedrals.

The local priest, Miro Beslic, convinced his flock to finance the purchase of the material. The Hajdarovacs will carve the chair for free.

“The whole country is in financial crisis, but once people understood that this is about the pope … then people accepted the idea,” Beslic told the AP.

Many Bosnians, including Muslims, Catholics and Christian Serb Orthodox, view Francis as a worthy pope — similar to their feelings for John Paul II, who is perceived as a champion of inter-faith cooperation and peace. John Paul’s statue decorates a square in the center of Sarajevo.